THEY ARE is a local multiplayer, for android devices. The main mechanic of the game is finding the balance between yielding to the temptation and chasing other player’s weaknesses. This is mainly an audio game although is also a physical one.

The jury was an international one consisting of five member related with the indie games scene, such as Brandon Boyer, chairman of the Independent Games Festival and founder of video game culture site Venus Patrol (USA), Ed Key indie developer of games such as Proteus (UK), Margaret Robertson, development director for Hide&Seek  (UK), Zuraida Buter, co-director of the Global Game Jam and initiator of the first Dutch indie game showcase festival Indigo (the Netherlands) and Adriaan ’s-Gravesande (the Netherlands), artistic manager of Jheronimus Bosch 500 Foundation. 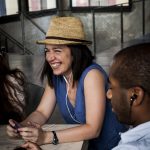 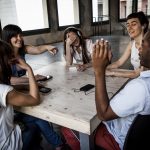 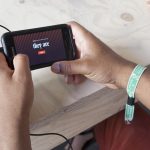 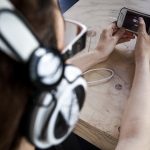 NARRATIVE INTRODUCTION
In a world of shades, do you dare to open your eyes? Tiny creatures are trying to exhort you with right and wrong advices. Will you follow their hints, or listen to your inner voice?

They Are is a local multiplayer audio game of intuition and reflexes, about temptation, inspired on Hieronymus Bosch’s fancies and imagery.
Although on his time Bosch’s paintings were well accepted as expressions of devotion, later on, the spanish Inquisition ticked them as heretic works.
From an ucronic contextual starting point in which Bosch and spanish Inqusition clashed to each other, we will set up an experience in which players must find the balance between yielding to temptation and chasing other player’s weaknesses.

Through audio landscapes and spoken-voice characters the game provides enough sources to the player to create some enigmatically beautiful imagery and enjoy some sort of arcane experience. The action is driven by audio cues that come up from the mobile to each player’s headphones, but the game actually happens in the physical space out of the devices, and mainly in the players’ minds.

Although each player plays against everyone else, every decision the player takes could affect himself positively or negatively in the long term, because in THEY ARE fate is reversible.

You can listen to some soundscapes Felipe Hickmann did from different stages of the playful experience here:

Game Objective: In early prototypes all players start with 0 points. The first to reach 30 points wins. Not meaningful diegetic objectives yet.

One of the players creates a game session in his device.

The other players, whose devices must be using the same wifi network, connect to the game session and get an ID number. The player that created the session confirms the game when everyone has connected.

Once this is done, each player puts on her headphones, which are connected to the device, and the game begins the moment all players have tapped the ‘Start’ button on their screen and closed their eyes.

Players must keep their device in their hand until the game ends, and hidden from the other players, like in their lap or under the table, for example. Players will have their eyes closed and their headphones on for the most part of the game.

The game always begins in this stage. To earn points, players have to catch other participants with their eyes open and react faster than them.

Players can open and close their eyes at any time.

– Hunter must quickly tap in his device’s screen on the ID number of the person with open eyes.

– Prey will do exactly the same and opposite (tap the hunter’s ID number), because the first to tap wins, but let’s imagine the hunter is faster this time

– Hunter receives 3 points. Prey loses 1 point, unless prey has 0 points in which case no points are subtracted.

Through their headphones, besides the background piped music, each player will hear random sentences from distinct groups of voices.

-BOSCH’S ESPRITS both introducing the players to a fantasy world and giving them an avatar profile which also will make them to perform. Examples:

“shake your head. shake your head, lots of little tiny red creatures, not bigger than a pearl are going up from your sharp shoe until your long bristles crest. you can’t neigh”

-INQUISITION GHOSTS with unnerving voices spiting commands, harshing criticisms, or teasing the players to be more daring. This makes the game system explicit and entice players to open their eyes. Examples:

“Hey look!, Player on your left is acting weird ”

«Now or never! Open your eyes, they are all distracted!»

«The player in front of you is so clumsy! I laugh in his face: Ha-Ha!»

“Do you think you are being watched by others?”

Besides, along with the background music, occasional laughter is heard from time to time through the headphones. We will also try to provoke laughter in the players with some audio cues, so that the headphones laughter gets mixed with real laughter from other players.

The characters heard by the player will suggest:

– Put a finger inside a nostril (“Nobody is looking! Do it, you know you want to…”)

– Smile with the mouth wide open

– Put the weirdest facial expression you can achieve, as if you were alone doing it for fun in front of the mirror

This means that when a player opens her eyes to try to hunt someone else, she will find a bunch of people doing silly things which- hopefully – make her to laugh (and easier to hunt).

Also, the voices would suggest to do some actions which emit some loud noise:

– Do as if they were snoring

– Make funny noises with the mouth

– Pant and gasp as if they were having sex

These leads to a strategy of luring ‘victims’ into opening their eyes by making the strangest noises, and trigger a hunt.

The more the game advances, the more frequent the voices will be heard. The two group voices can also start arguing with each other, or even overlap.

The more points a player has, the more annoying, loud and frequent the voices are heard.

Players do never hear the same at the same time. Each player hears different sentences at different times.

If none of the players taps any name for 20 or more seconds, the game will ask a random player to open his eyes – and he can obey or not. The other players are told that someone has been forced to open his eyes.

In this stage, one of the leading players risks losing his device – and with it, his score.

Randomly every 2-3 minutes, the game chooses randomly one player among the 3 ones currently leading. The chosen player has to:

– Select on the screen which player will be faster

– Unplug his headphones, leave his device in the center of the table, and tap the screen

At this moment, all the other players are informed that:

– There’s a device in the center of the table, owner unknown

– When the countdown ends, they must open their eyes and tap in their screens the name of the deviceless player

The mobile in the center of the table will ‘speak’ aloud the name of the faster player.

If the deviceless player guessed correctly who would be faster, he recovers his device.

If the deviceless player failed his prediction, swaps his mobile with the faster player.

At some point every 4-5 minutes, the game asks two or more players to open their eyes and swap positions in the table.

Sometimes these swaps are meaningful (for example, to put the best two players in front of each other), and sometimes purely random. The players never know the reasons of the commanded swaps.

The score system in the game is designed to favour the worst performing players, so that there’s never a huge score difference between the best performing and the worst.

Silently forcing punish and shuffling stages so the best performing players either lose points, their device, or change their position, will help take the game to a close finish, in which many players will be close to win, making the outcome more thrilling and unexpected.